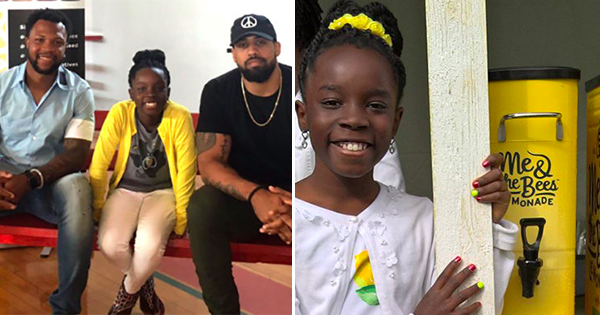 Mikaila Ulmer was only 4-years old when she started branding her Bee Sweet Lemonade. Now she is 12-years old and has just convinced ten NFL players to invest $810K in her lemonade business, now called Me & the Bees Lemonade.
Located in Austin, Texas, her company has already sold more than 300,000 bottles of fresh-squeezed lemonade which features added Texas wildflower honey, flaxseed and mint. Her products are available nationwide in major grocery retailers like Whole Foods and Wegmans.

So, why do football players want to invest in a lemonade business?

Well, first of all, Mikaila's business has been a huge success! She has been featured on Good Morning America, Shark Tank, 20/20, CNBC, and NBC News. She has also been featured in Black Enterprise Magazine and Food Network Magazine, was invited to the White House to meet the Obamas, and has more than 50,000 followers and fans on social media.

Arian Foster, a retired NFL running back for the Houston Texans, comments, "We look for companies that match our main focus of developing a good product, but are also good people and do it for the right reasons. It's more than about money to us. We believe that investing in small Black businesses is extremely important."

How she got started

Mikaila became interested in bees after she was stung by them twice at the age of four. The lemonade idea came from her grandmother who sent her family a 1940's cookbook, which included her special recipe for Flaxseed Lemonade. After she forgave the bees, Mikaila decided to help them by adding honey into her great grandmother's lemonade recipe.

The idea was a big hit, and people have always been impressed that she is such a young entrepreneur. She went on to win a $60K investment from Daymond John on Shark Tank, and landed a 62-store Whole Foods deal.

Her plan is to make her drinks more widely available in convenience and grocery stores worldwide, and this new investment from NFL players is surely going to take her to the next level.

For more details about Me & the Bees Lemonade, visit www.meandthebees.com or follow her on Facebook at www.facebook.com/MikailasBees/