Bishop Richard Allen, the founder and first bishop of the African Methodist Episcopal Church, was also a successful businessman, civic leader and social activist. Born a slave in 1760, Allen bought his freedom while in his 20s and was ordained as a minister in 1784. In 1787, Allen and fellow preacher, Absalom Jones, established the Free African Society to assist freed slaves and migrants. He also persuaded Black Philadelphians to serve as aid workers during a yellow fever epidemic in 1793 and prepared the Black community to defend the city during the War of 1812. Eager to establish an independent African American church, Allen purchased an old blacksmith's shop and moved it to land he owned at Sixth and Lombard Streets. Bethel Church was dedicated in 1794 and soon attracted hundreds of members. Today, Mother Bethel AME Church stands on the site where Allen converted that old blacksmith's shop more than two centuries ago. In 2016, the U.S. Postal Service issued the Richard Allen stamp. 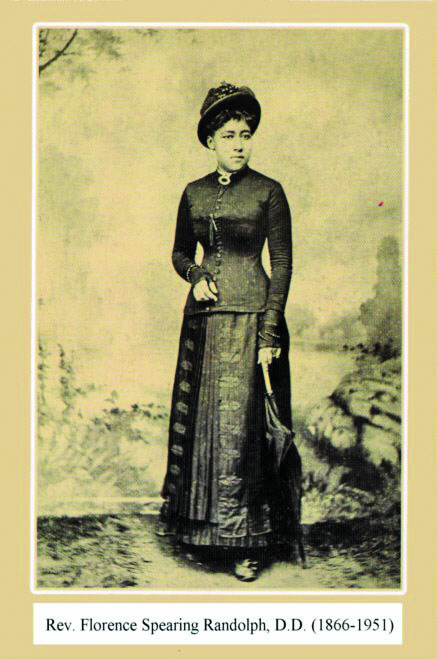 The Rev. Florence Spearing Randolph, the pastor of Wallace Chapel AME Zion Church in New Jersey, made bold stands for racial and gender equality in the early 20 th century. Licensed to preach in 1897, she was ordained an AMEZ deacon in 1901 and an elder in 1903. To those opposing her ordination, Randolph responded in her sermon entitled, "Antipathy to Women Preachers" in 1909. According to Kenyatta R. Gilbert, associate professor of Homiletics at Howard University, Randolph's sermon "highlights several heroic women in the Bible...she argued that gender discrimination in Christian pulpits illustrated a misreading of scripture." Gilbert added, "Randolph's sermon, 'If I Were White,' preached in...1941, argued that the refusal of whites to act justly toward blacks, domestically and abroad, embraced sin rather than Christ." Randolph served 21 years at Wallace Chapel and built the church's current edifice before retiring in 1946. She was also president of New Jersey Women's Foreign Missionary Society, founded the NJ State Federation of Colored Women's Clubs, and an executive board member of the NJ Woman Suffrage Association.

The Rev. Dr. Vernon Johns, often called the father of the civil rights movement, was the pastor of Dexter Avenue Baptist Church in Montgomery, Alabama from 1948 to 1952, preceding the Rev. Dr. Martin Luther King, Jr. He was the first Black to have his work published in "Best Sermons of the Year" in 1926. A brilliant theologian who spoke multiple languages, Johns' sermon titles such as "Segregation After Death," "It's Safe to Murder Negroes in Montgomery" and "When the Rapist is White" - that he posted on the church's outdoor marquee - often underscored the indignities African Americans suffered in the South. Johns also publicly protested against the raping of Black women by White men by taking victims to the hospital and accompanying them to file charges. Although he rarely won, Johns continued to highlight injustice through actions like opposing racist bus policies and segregated restaurants. His behavior made both his Black congregation and the White community uncomfortable and in 1952, he resigned and returned to his home in Farmville, Virginia.

The Rev. Dr. Martin Luther King, Jr., served as co-pastor of Ebenezer Baptist Church in Atlanta, Georgia, and pastor of Dexter Avenue Baptist Church in Montgomery, Alabama. He was the "face" of the civil rights campaigns of the 1950s and 1960s. Launched into the public spotlight by leading 1955's Montgomery Bus Boycott, he later headed marches throughout the South to bring attention to the legal segregation laws against Black Americans. King famously paired nonviolence and civil disobedience with his Christian principles to advance the cause of civil rights. His legendary rallies, speeches and boycotts led to the passing of the Civil Rights Act of 1964 and Voting Rights Act in 1965. King was also a founder of the Southern Christian Leadership Conference in 1957, an organizer of the historic 1963 March on Washington and winner of the Nobel Peace Prize in 1964. King was in Memphis, Tennessee supporting Black sanitation workers when he was killed by a sniper's bullet in April 1968. His birthday was designated a federal holiday in 1983.

The Rev. James M. Lawson is renowned for his work in teaching nonviolent resistance in the civil rights movement. The retired pastor of Holman United Methodist Church, Lawson was an early convert to nonviolent resistance, which he demonstrated in 1951 when he said he was a conscientious objector and was arrested for refusing to report for the draft. Lawson also worked closely with the Rev. Dr. Martin Luther King, Jr., and trained many of the future leaders of the movement including John Lewis, Diane Nash, Marion Barry and James Bevel. In addition, his students participated in the Freedom Rides, the 1963 Birmingham Children's Crusade, the 1966 Chicago Open Housing Movement and the Anti-Vietnam War Movement. Since retiring from Holman UMC in 1999, Lawson continues to share his strategies and tactics with individuals and organizations around the world. The James Lawson Institute offers training in people organizing movements and nonviolent civil resistance.